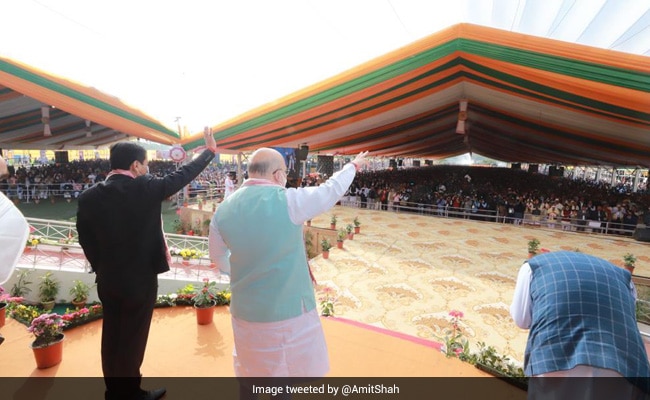 The super speciality medical college, being set up for a total cost of Rs 755 crore, would include medical education wing at Lokapriya Gopinath Bordoloi Chest Hospital Complex at Kalapaharand super speciality wings at Mahendra Mohan Choudhury Hospital in the city.

Mr Shah also ceremonially distributed financial assistance to namghars under Asom Darshan scheme. Notably, 6972 out of total 8,000 namghars will be developed in the first phase and an amount of Rs 2.50 lakh will be allocated to each namghar under the scheme through which the namghars will be developed as community centres for the upliftment of the society. The total amount earmarked for the project is Rs 200 crore.

At the same programme, the Home Minister laid foundation stone of development and beautification project of Batadrava Than, the birthplace of social reformer and proponent of neo Vaishnavism Srimanta Sankardev, in Nagaon. The project, worth Rs 188 crore, entails development of the Than as a centre of art, culture and spiritualism while turning it into a place of tourist attraction.

Addressing a mammoth public gathering, the Home Minister thanked Assam government led by Chief Minister Sarbananda Sonowal for taking the historic step of providing financial assistance to 8,000 namghars of the state and also towards development of Batadrava Than for strengthening the cultural heritage and preserving the legacy of Srimanta Shankardev till posterity. He also praised and Minister of Health, Finance and Education Himanta Biswa Sarma for his efforts towards development of the State.

Mr Shah said the previous Congress government in the state did not take any step to free the lands of Batadrava Than which were encroached by illegal immigrants. The lands have been freed by the present state Government as only the BJP led governments both at centre and state are committed to protect and preserve the language, literature, culture and heritage of Assam, he said.

5 Wounded In Shooting, Bomb Attack On US Clinic