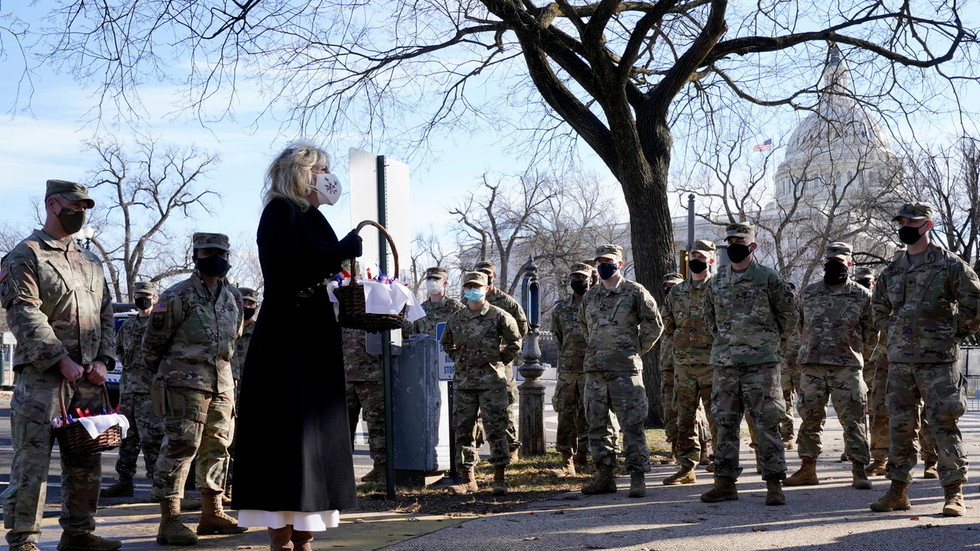 US President Joe Biden has apologized for 5,000 National Guard troops sleeping in a parking garage outside the US Capitol, and the First Lady brought them cookies, amid reports that up to 200 troops may have caught Covid-19.

Biden phoned General Daniel R. Hokanson, head of the National Guard Bureau, on Friday to apologize and ask what he could do, his administration officials told reporters. Meanwhile, First Lady Jill Biden was dispatched to the Capitol grounds to hand out chocolate chip cookies to some Guard members.

There was no mention of either of them addressing a statement by a US official that up to 200 National Guard members have tested positive for the coronavirus during the week-long deployment in Washington, DC.

More than 25,000 troops were deployed to Washington, DC to provide security for Biden’s inauguration, amid claims by Democrats that the January 6 unrest at the Capitol amounted to an “insurrection” against the government by supporters of the outgoing President Donald Trump. The inauguration before the locked-down and empty National Mall went ahead without any security threats.

On Thursday, Politico broke the story that around 5,000 troops ended up spending the night in an unheated parking garage, with only two toilet stalls and no electricity or internet access. It remains unclear who actually gave the order for the Guard to leave the Dirksen Senate office building, as the Capitol Police denied having anything to do with it.

The garage affair has riled up lawmakers on both sides of the aisle. Three Republican governors have already ordered the troops from their states to withdraw from DC.

“They’re soldiers, they’re not Nancy Pelosi’s servants,” Governor Ron DeSantis of Florida told Fox News on Friday morning. “This is a half-cocked mission at this point, and I think the appropriate thing is to bring them home.”

His colleagues Greg Abbott of Texas and Chris Sununu of New Hampshire have announced that their National Guard units will be leaving as well. Even Democrats were angered, however.

“This is no way for our heroes to be treated,” New Jersey Governor Phil Murphy said on Friday. “Thankfully, none of our Guard – none of the New Jersey Guard – were left to have to deal with such disrespect.” The NJ troops were apparently placed in various hotels in the DC area.

The Pentagon announced on Friday that about 19,000 Guard troops were packing up and leaving Washington, a process they said would take from 5-10 days and include coronavirus screenings. Politico reported on Friday that some 100 soldiers caught the virus at some point during the deployment, with an unnamed US official saying later in the day that the number might be as high as 200.

Almost 7,000 troops will stay in Washington through the end of January, the New York Times reported, while Senator Chris Murphy (D-Connecticut) told Politico their presence might be needed “for the foreseeable future.”