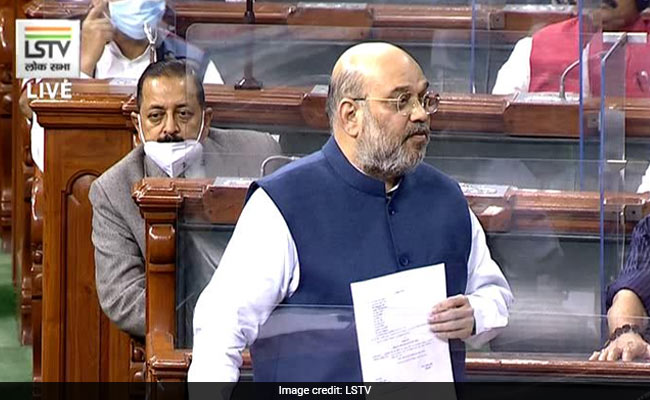 Jammu and Kashmir will be given statehood “at an appropriate time”, Home Minister Amit Shah said Saturday, during a Lok Sabha discussion on the J&K Reorganisation (Amendment) Bill, 2021.

Responding to claims that passing an amendment to the 2019 bill – which split the former state into two union territories after Article 370 was withdrawn – meant the centre had no intention of restoring statehood, a furious Mr Shah said he had “clarified the intentions” of the bill.

“Many MPs said bringing the amendment means J&K won’t get statehood. I am piloting the bill, I brought it. I have clarified the intentions. Nowhere is it written that Jammu and Kashmir won’t get statehood. Where are you drawing this conclusion from?” Mr Shah asked of the opposition.

“I have said in this House and I say it again – this bill has got nothing to do with the statehood of Jammu & Kashmir. Statehood will be given… at an appropriate time,” Mr Shah stressed.

The Home Minister also criticised the opposition – while paying particular attention to the Congress – for seeking answers from the Narendra Modi government over promises made as J&K’s special status was withdrawn, but failing to provide any of their own.

“We were asked what we did about promises made during abrogation of Article 370. It has been 17 months since… and you are demanding an account? Did you bring the account of what you did for 70 years? Had you worked properly… you need not have asked us,” Mr Shah raged.

“I will give an account for everything. But those who were given the opportunity to govern for generations should look within if they are even fit to demand an account,” he added.

In a move that sparked controversy and made international headlines, the centre, on August 5, 2019, revoked special status given to J&K under Article 370 and split into two union territories.

The move was preceded and followed by a strict security blanket, which included months-long suspension of mobile and internet services and the deployment of thousands of troops.

It also included the detention of dozens of mainstream political leaders, including former Chief Ministers Farooq Abdullah, Omar Abdullah and Mehbooba Mufti, all of whom were later charged under the Public Safety Act (PSA) and only released late last year.

Multiple petitions have been filed before the Supreme Court asking for a review of the centre’s decision on Article 370. A verdict on these petitions is pending.

A Stunning Courtship Display On Water For Valentines Day

Blast In US’ Nashville After Chilling Warning

UPPRPB To Fill 9534 SI Posts In UP Police