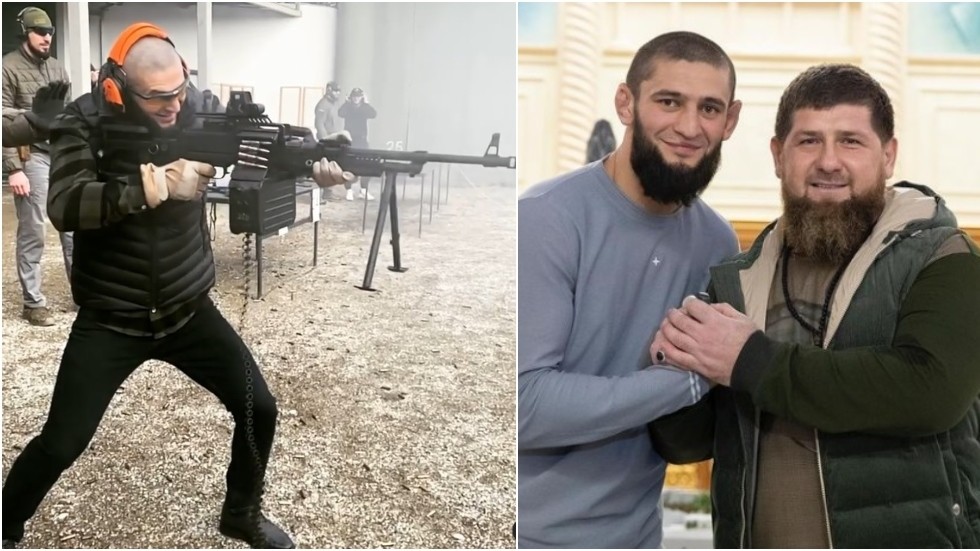 Rising UFC star Khamzat Chimaev has started 2021 with all guns blazing, sharing footage of himself firing rounds from a machine gun in his Chechen homeland after recently meeting local leader Ramzan Kadyrov.

The Chechen-born Chimaev, who emigrated to Sweden as a 19-year-old and now fights out of the Allstars Gym in Stockholm, has been back in the Russian republic in January for a visit during which he has met local children and also been feted by MMA fan Kadyrov.

UFC's @KChimaev arrives in Chechnya, tells journalists why his fight against @Leon_edwardsmma fell through pic.twitter.com/0YKvTI30BT

The latest footage, shared in slow-mo with Chimaev’s 1.2 million Instagram followers, shows the UFC star at a firing range blasting from a light machine gun.

The 26-year-old shared the clip with a ‘raised finger’ emoji and a smiling face with sunglasses.

Chimaev burst onto the UFC scene in 2020, winning three fights in the space of just 66 days.

That earned ‘Borz’ a shot at welterweight title contender Leon Edwards, although the pair have seen two scheduled bouts fall through due to Covid-19 infections to each of them.

On the latter of those occasions, the pair were due to headline a UFC Fight Night card on Fight Island in Abu Dhabi on January 20, although Chimaev was forced to withdraw after suffering lingering effects from the virus.

UFC boss Dana White has said the fight will be rebooked rather than Edwards being handed a new opponent.

The much-awaited contest pits the British star – who is on an eight-fight hot streak – against Chimaev, who is 9-0 in his professional MMA career and who in his last bout knocked out Gerald Meerschaert out in just 17 seconds.

Chimaev is not the only Russian-born UFC fighter to enjoy a trip to the firing range, as lightweight champ Khabib Nurmagomedov has also been seen firing guns.

Back in October 2018, boxing icon Floyd Mayweather also visited a firing range when he was in Chechen capital Grozny, after attending a combat sports event with local leader Kadyrov.

How can we make washing machines last?