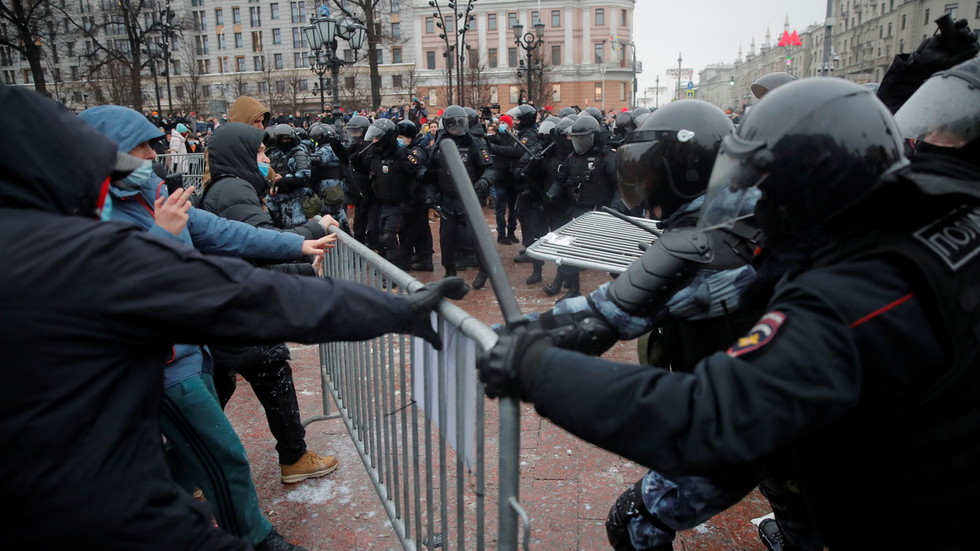 The US embassy in Moscow interfered in Russia’s affairs by backing anti-government rallies, Kremlin spokesman Dmitry Peskov has said, asking people to imagine the “discomfort” of Washington if Russian diplomats did the same.

Statements coming from the US embassy regarding Saturday’s demonstrations in Russia were “inappropriate,” Vladimir Putin’s press secretary told TV channel Rossiya-1. “Of course, indirectly they represent absolute meddling into our domestic affairs,” he said.

With those publications, the American diplomats also showed their de facto “support for the violation of the Russian law,” since the anti-government protests they spoke about were unauthorized, Peskov pointed out.

If our embassy would act the same way during the riots in the US… it would, probably, cause some sense of discomfort in Washington. So, I always like to recommend our counterparts to project this situation on themselves.

In his further comments on the protests, the Kremlin spokesman said that he respected all points of view but was “absolutely against illegal rallies.” He also insisted that those who supported the government vastly outnumbered the opposition demonstrators.

Activists backing opposition figure Alexey Navalny staged rallies in many cities across Russia on Saturday, despite Covid-19 restrictions. Tensions ran high during the protests, leading to clashes with police and arrests.

Navalny was jailed for parole violation on his return from Germany a week ago, having been there recovering from an alleged poisoning in August. The opposition figure has blamed the Russian authorities for masterminding an attack against him, a claim consistently denied by the Kremlin.

Amid the rallies on Saturday, the US embassy in Moscow wrote on Twitter that it supported the right of all people to a peaceful protest and that “the actions of the Russian authorities are aimed at suppressing those rights.”

A day before that, it also posted a notice on its website, advising US citizens in the country to “avoid” the rallies due to “possible dispersal of demonstrators.”

The warning contained a list of a dozen major cities with the locations and the time of the demonstrations. For example, it said that in the capital Moscow the protesters would gather in the center and “march towards the Kremlin.”

Russian Foreign Ministry spokeswoman Maria Zakharova wrote on social media that the American diplomats would have to “explain themselves” regarding the statements.

Similarly to Peskov, Zakharova asked her readers to “imagine what would’ve happened if the Russian Embassy in Washington published a map with protest routes and their final destination being the Capitol, for example.” Such actions would spark “hysteria from the US politicians” and threats to expel Russian diplomats, she insisted.

'It's not the end': Russian activist prepares for jail