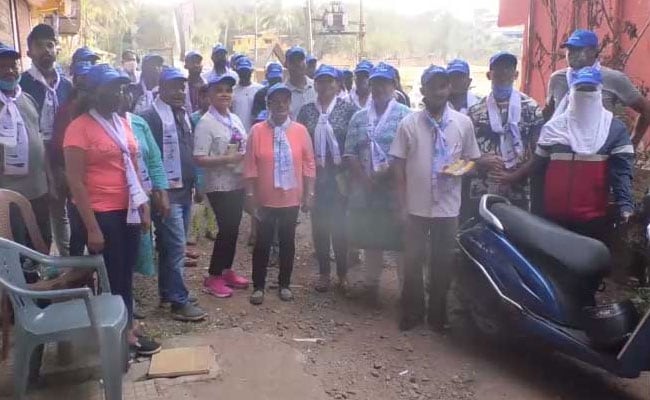 AAP Banks On New Faces In Goa Ahead Of Assembly Elections

AAP is confident that its candidate will be able to defeat experienced faces.

Arvind Kejriwal’s Aam Aadmi Party, buoyed by its success in Benaulim zilla parishad polls, is repeating its strategy of fielding fresh faces in the coming bye-elections for the Navelim zilla panchayat. After a complete washout in its debut election of 2017, the party is now hoping to replace Congress as a main opposition party in Goa in 2022. With just seven months to go for the elections, the zilla panchayat polls will be the acid test.

This time, AAP’s candidate is Matilda D ‘Silva — a first- timer in politics, much like Hanzel Fernandez, who won in Benaulim.

Hanzel Fernandez was a carpenter’s son who came up on top on the promise of door-to-door delivery of services. Now Matilda D’Silva is going door to door, asking for votes.

“There are many reasons I am going to win,” Ms D’Silva told NDTV.

“Anganwadis here are in bad shape. The garbage collection is a mess. Water bodies are polluted. Even the streetlights don’t work…all of this is a big scam. People here want someone who can take care of all this. The parties currently in the political space can’t do it,” she added.

Challenging Ms D’Silva is a well-known Congress face — Pratima Coutinho, who says she made the “sacrifice of coming from an MP ticket to a Zilla Parishad ticket” in the interest of the party.

“I don’t consider myself a politician. What is important for me is serving people at the grassroots,” she told NDTV.

“People in Navelim are saying Matilda is not a winning candidate because she has no experience in grassroots work. She has never been a panchayat member or a sarpanch. She is not even a social worker. It is not just about the party, but also about the person contesting,” she added. The Goans, she said, want to see the background of the person and what capacity he or she has.

AAP though, considers the freshness the strength of their candidate, convinced that the people of Goa are looking for new faces in politics. The battle, they say, will be between someone fresh with a promise to deliver and a candidate from a party that hasn’t managed to keep its flock together.

AAP is banking on the Congress’ troubles to put up a strong fight against the BJP. What is also likely to be a challenge for Pratima Coutinho is her perceived lack of camaraderie with Navelim MLA Luizinho Faleiro, a former Chief Minister.

The other candidates in fray are the incumbent Cipru (Edwin) Cardozo, an Independent, and the BJP’s Satyavijay Nagesh Naik.

AAP is confident that its candidate will be able to defeat these experienced faces.