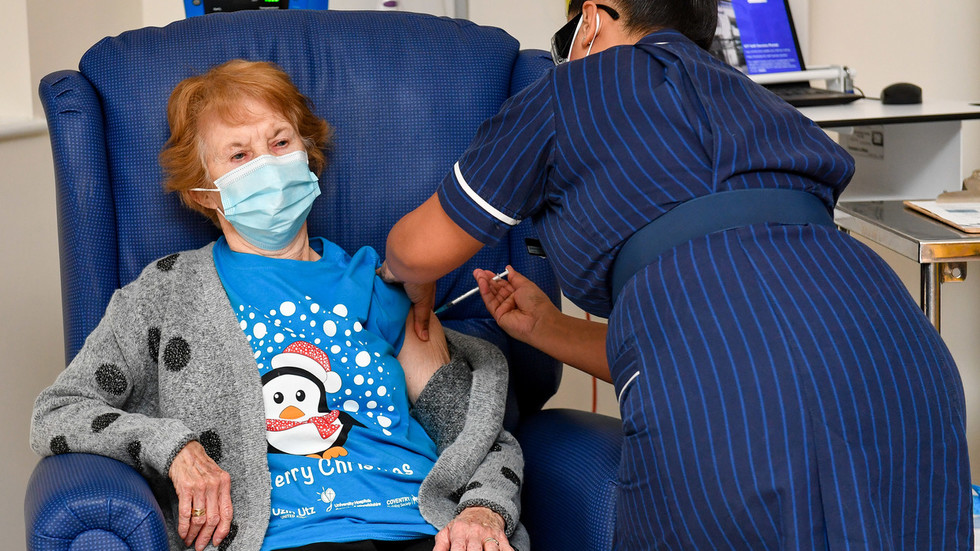 A 90-year-old woman has become the first person in the United Kingdom to be injected with Pfizer’s coronavirus jab who was not part of a clinical trial, as the country begins a mass inoculation program against the illness.

Margaret Keenan, from Northern Ireland, received the vaccine on Tuesday morning. The retired jeweller will take a second dose of the drug in three weeks, and is expected to have full immunisation by early January.

Footage shows a health worker administering the jab as Keenan sits in a large armchair. Bystanders clapped after she received the vaccine.

The jab, developed by US pharmaceutical giant Pfizer and Germany-based BioNTech, will be available at 14 locations across the UK starting on Tuesday as the nationwide vaccination program begins.

The first person in the UK has been given the Covid vaccine.

Margaret, a 90-year-old retired jeweller from Northern Ireland, has become the face of the fightback against the Covid-19 pandemichttps://t.co/NrjEeANhKd pic.twitter.com/WSgpnxd8Ki

Currently, the drug is reserved for 10 categories of high-risk or high-priority individuals, totalling 25 million people. In a controversial decision, the UK government announced that NHS workers, who for months were promised that they would be first in line to receive the jab, would not be a top priority.

The UK has ordered 40 million doses of the Pfizer-BioNTech vaccine, enough to inoculate 20 million people.

Brits are getting fed up with lockdown as more shoppers are out and about, data shows